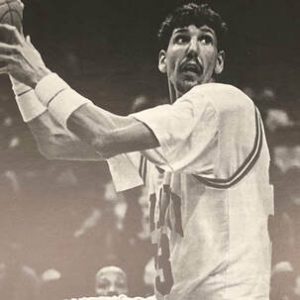 When you say ‘Big Man in the Middle,” no one stood taller for the Miami Hurricanes than Constantin Popa.  At seven feet-three inches, Constantin is the tallest person to ever don the Orange, Green, and White.  But his presence and development on the court meant so much more to UMSHoF member Coach Leonard Hamilton as he tried to build the Canes program in the tough Big East Conference.

The native of Bucharest, Romania, a/k/a “The Chairman of the Boards,” led the Canes in rebounding and blocked shots in all four of his seasons in Coral Gables.  Popa is still UM’s career record holder with 263 blocks, and with 375 personal fouls.  During the 1992-93 campaign, he set then-school records with 8 blocked shots in a game against FAU, and compiled a total of 85 blocks that season.

Constantin is a member of UM’s elite 1,000-Point Club, finishing with 1,132 points, which was 15th all-time when he graduated.  His .493 career field goal shooting percentage is currently 6th all-time.  He was selected third team All-Big East in both 1992-93 and 1994-95 and helped lead the 1994-95 Canes to the school’s first post-season appearance since 1964, when they played in the National Invitational Tournament (NIT).

In 1995, Popa became only the 12th player in UM history to be taken in the NBA Draft when he was selected in the 2nd round (53rd overall) by the L.A. Clippers.  He would play professionally overseas in France and Israel, helping his franchises win 5 National Championships.  Following his retirement, he coached women’s basketball at the University of Indianapolis.

Constantin graduated Miami with a Bachelor of Business Administration degree, something he’s especially proud of since English in his second language.  He is currently Director of Business Development for the technology company Donnellon McCarthy Enterprise out of Cincinnati.  Constantin has five children: Daniella, Tristan, Dayana, Tatiana, and Dominique.