We’d love to tell you that Jim George had a vision for being a successful executive in the office technology industry, but that would be inaccurate. In fact, the man himself admits to entering the industry with his “eyes wide shut.”

George’s foray into the industry came via unfortunate circumstances. A veteran of the U.S. Navy who served during Operation Desert Shield/Storm in the early 1990s, George went to Miami in 1999 to take care of his father, who was facing a terminal illness. While there, he interviewed with Lanier and was offered a job. It was the genesis of a 20-year career working for such luminaries as Konica Minolta, Ricoh, Neopost and ProSource.

“I didn’t really do any research (on the industry) and didn’t put any thought into it, either,” said George, a 2019 ENX Magazine Difference Maker. “(But) the decision was a great one and it still is.”

George has found a home in Cincinnati as president of Donnellon McCarthy Enterprises (DME), spearheading a coast-to-coast expansion initiative that has seen the company acquire dealers in Ohio, West Virginia and Illinois. Beyond geography, George is also a huge proponent of individual growth and takes great satisfaction in seeing team members grow personally and professionally.

George has made it his mission to enhance the company’s reputation as a great place to work. That’s been validated as DME has earned a trio of consecutive Top Workplaces in Cincinnati awards since his arrival. And he’s raised the team concept at DME with his “One Team, One Vision, One Goal” slogan.

That level of excellence is a standard that George holds himself to, as well. “I care about our industry and where it is headed,” he said. “I try to learn as much as possible and do not shy away from hard discussions. My job as a coach and leader is taken very seriously, with a twist of fun.”

Life has taught George that our existence is fleeting, and that it’s important not to worry about the small matters we encounter on a daily basis. “It’s OK to have fun at work,” he added. 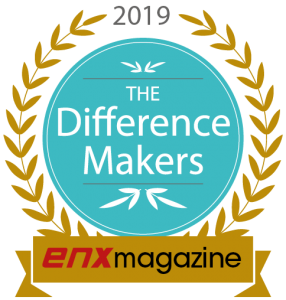 Still, George makes sure that he’s taking care of business, and the dealer has the hardware to prove it. DME has won the Sharp Hyakuman Kai Award and Toshiba America Business Solutions Dealer of the Year awards. The company also garnered the Torch award from the Better Business Bureau for business ethics.

The future is looking bright for DME. George is predicting double-digital growth for 2019, and his goal is to remain focused on his core competencies. He hopes to continue his personal growth at home and through the church.

George and his wife, Claudia, have three grown sons. They love to travel as a family. Both Jim and Claudia have lived “all over Europe” and love to visit as often as possible, with Germany and Austria among their favorite destinations.